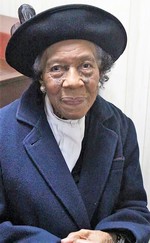 Ms. Amy E. Smith was the fifth of eight children born to the union of the
late William and Mary V. Smith. She was a quiet and gentle spirit. One of
her favorite quotes was “If a task is once begun, never leave it 'till it's
done. Be the labor great or small, do it well or not at all.” She was a master
seamstress known throughout Perry County and beyond. She served as a
surrogate mom to many of her nieces and nephews. As a lifelong member
of Mt. Tabor African Methodist Episcopal Zion Church, she followed in her
mother’s footsteps in being part of the Sunday School department, serving
as the secretary for over fifty years and as a choir member. She was
committed to her church, her family and to her community.
She was preceded in death by her parents, her four sisters and their
spouses Willie Lee (Tommy) Sullivan, Allie Mae (Dorcas) Benson, Annie
Pearl (Nathaniel) Richardson, Rozean (Leslie) Patterson and three brothers
and their spouses Clayton (Jimmie) Smith, James (Catherine) Smith, and
Clovis (Marvella) Smith; one niece and three nephews Gwendolyn Benson
Stoves, Donald Sullivan, Leonard Benson, and Clovis Smith, Jr.
She leaves to cherish her memory, her many nieces and nephews. Lawrence
Sullivan, Wilfred Sullivan, Tommie Y. Core, Dorcas Benson, Marian
Williams, Vergie Spears, Sadie Hinton, Palmer Richardson, James Richardson,
Nathaniel Richardson, Jr., Alberta Richardson, Michael Patterson,
David Patterson, Jean Dorsey, Bruce Patterson, Julie Patterson, James
Smith, Carlotta Smith, Lois Smith, Frederick Smith, Ozzie Smith, Carl Smith,
Pamela Smith, and Algee Smith, a host of great nephews and great nieces,
two of whom, Derrick Core and Leslie Core grew up in her home, along
with other extended family members and friends.
She was a very special and kind person. She will be remembered for her
love for everyone, her kind smile, and good cooking especially her banana
pudding.