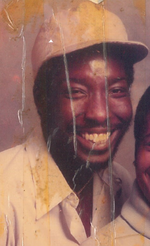 DONALD JONES was a native of Mobile, Alabama for many years. He was born July 12, 1956 in Mobile. He worked at the auditorium for many years. He was the son of the late Lillie Bell Jones and Leorst Jones of Mobile.
He is survived by one daughter, Kenetha Harris; four grandchildren: Master King, KeAsia, Knoah and Jakins all of Mobile; two brothers: Carl (Linda) Jones and Ronald Jones; three sisters: Vicia J. Blackman, Vanessa Jones, and Carolyn Carey; two aunts: Gladys Jones and Katie Jones; a devoted niece, Sherrel Davis; his devoted sisters-in-law, Evelyn Jones and Gennie Jones; a brother-in-law, Joseph Jones; a host of nieces, nephews, other loving relatives and friends that will miss him dearly.