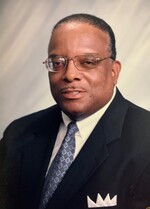 Dr. Ollie Powe III peacefully made his transition on Tuesday, December 1st at his home surrounded by his wife and son. He was born February 28, 1951, in Mobile, the son of the late Ollie Powe, Jr. and Irma Olivette Stokes Powe.


Dr. Powe, a high achiever, served as president of the 1969 Class of Toulminville High School for three consecutive years. Following graduation, he attended Dillard University in New Orleans, LA along with his high school sweetheart, Barbara Highsmith, whom he married in 1971. After graduating in 1973, he attended Indiana University College of Optometry in Bloomington, Indiana. He graduated in 1977, then returned home to Mobile, Alabama to serve his own community as the first black optometrist to open a private practice in the state of Alabama.


Dr. Powe served his local community his entire life. He was an ordained elder in the A.M.E. Zion Church and pastored faithfully for 14 years. During his time in ministry, he founded the former Trinity Full Gospel AME Zion Church and was twice awarded Pastor of the Year.


An avid golfer, Dr. Powe earned many trophies. The most prized being the ones won during the Annual Powe Family Golf Classic. He enjoyed connecting with his classmates during the All Rattler Class Reunions and was honored as the LeFlore High School Rattler of Distinction, 2014.