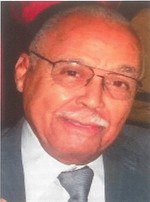 Freddie Joseph Howard, Sr. was born February 1, 1931 in Mobile, AL. Freddie was educated in the Mobile County Public School System attending Most Pure Heart of Mary and was a graduating member of Central High School Class of 1950. Freddie was a veteran of the Korean War and was employed with the U.S. Postal Service as a Mail Carrier out of the Springhill Branch until his retirement in 1987. Freddie was married to Doris Margaret Washington Howard for 58 years.