To share your memory on the wall of Gerald Stevens, sign in using one of the following options:

Provide comfort for the family of Gerald Stevens with a meaningful gesture of sympathy.

Repass will be served at the church after internment

The family extends Special Thanks to Southern Cancer Center , Saads hospice, Pro health and each and every individual that offered their time , meals , assistance to our family and love . You will forever hold a place in our hearts . Thank you to all for your support,, prayers, calls flowers ,cards . Whatever you have done to strengthen us at this time went not unnoticed by God nor the family.
May God forever bless you.
Read Less

We encourage you to share your most beloved memories of Gerald here, so that the family and other loved ones can always see it. You can upload cherished photographs, or share your favorite stories, and can even comment on those shared by others.

Love, Dallas and Julia Ridgely sent flowers to the family of Gerald Leroy Stevens.
Show you care by sending flowers

Love, Dallas and Julia Ridgely purchased flowers and planted a memorial tree for the family of Gerald Stevens. Send Flowers

Flowers were purchased for the family of Gerald Stevens. Send Flowers

Posted Nov 06, 2019 at 05:53am
I feel so honored that the family chose one of my many pictures of Gerald and this one in particular. It was taken February 27, 2017 at the Order of Doves Ball. We of course had a great time dancing. I am happen to have known him and to have been able to capture so many memorable moments in our tenure as friends. I will miss him until l leave this earth. Rest on my Dear Buddy. Brenda Alexander-Gay A proud member of the STEVE STEPPERS.
Comment Share
Share via:

Posted Nov 05, 2019 at 09:30pm
I remember going to his line dance classes at Texas Street Recreation Center to learn how to swing out and I was stepping all over his feet. 🤦🏽‍♀️ He finally look at me and said, " Young Lady will you please let me lead and relax your killing my toes." He was so patient and just a natural. He will truly be missed by many.
Nikki, I will continue to lift you up in my thoughts and prayers. Just know that you are the BEST DAUGHTER EVER and YOUR Parents did a great job showing you LOVE because you gave it back to them in their time of need. 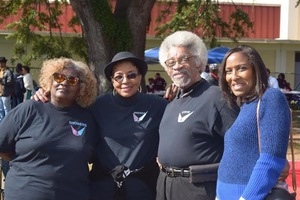