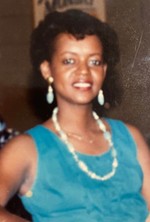 Jacquelyn Scott Whigham answered the Master’s call at her home in Lilburn, GA, and exchanged this life for life eternal on Thursday, October 15, 2020. Jacquelyn, affectionately known as Jackie, was born on April 6, 1953 to the late John D. and Florean Scott. She was preceded in death by both parents, and her sister, Shelia Scott.
Jackie accepted Christ at an early age. She was an active member of Franklin St. Baptist Church, which, at that time, was located on Franklin Street in downtown Mobile. Jackie regularly attended Sunday School, worship service, Baptist Training Union (BTU), Vacation Bible School during the summer, and was a member of the UJ Robinson Youth choir.
Jackie attended Mobile public schools where she graduated from Toulminville Senior High School in 1971. After high school, she attended Bishop State Community College in Mobile. She began a career with Southern Bell in Mobile and later transferred to AT&T in Atlanta, Georgia, where she retired in 2006.
Jackie married Melvin Whigham in 1971. To them were born two children, Zsaquez and Kelvin. Her memory lives on in the hearts of Melvin, her daughter Zsaquez of Lilburn GA, her son, Kelvin (Rachel) of Powder Springs, GA, four grandchildren, Paysley, Ethan, Max, and Merida; one brother, John (Melva) of Raleigh, NC; three sisters, LaRuth (Charles) of Detroit, Voncile (James) of Mobile and Katrina of Mobile. Three aunts also survive her; Luvenia Scott of Mobile, Carzetta Scott of Mobile, and Velma Primm of Monroeville, AL, as well as a host of nieces, nephews, cousins, and friends.