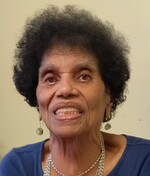 Myrtle Johnson Bijole was born on May 6, 1930 to the union of Frank and Eldora (nee Peterson) Johnson, the fourth of their eight children. Myrtle married Lester Reaves in 1949 and the couple expanded their small family with the addition of three daughters: Evelyn, Arnetta, and Sharon. Myrtle found herself a young widow upon Lester’s untimely death in March 1975. Subsequently, she met widower Benjamin Bijole and the couple wed in 1977. She promptly embraced Ben’s four children – Angela, Ben Jr., Eric, and Gloria – as her own, firmly cementing her role as the family matriarch.

One who never met a stranger, Myrtle would strike up a conversation with anyone and could be the life of a party without ever having a single sip of alcohol. There was no pretense about her; what you saw is what you got. At times, she was painfully blunt, but her unfiltered words of wisdom never failed to have value. If you made a mistake, she let you know it (and you seldom made the same mistake twice!). She laughed at herself as easily as she laughed at others and her laughter was contagious. Between her embellished tales and her comical antics, Myrtle could keep you entertained for hours.

The country girl from Holly Springs, Mississippi matured into a smart, stylish, and confident woman who could hold her own in any space. She raised a lot of children, directly and indirectly, and taught them all to be just as confident, independent, and unafraid as she was. She touched many lives.


In response to current COVID19 pandemic conditions, a private funeral is scheduled.

In lieu of flowers, contributions may be sent to the American Cancer Society in honor of Myrtle Bijole at https://donate3.cancer.org/