We're sorry but the candle you have selected is currenty in the process of being purchased or has just recently been purchased.

Please feel free to select another candle or check back in 15 minutes to see if the candle you have selected has been released for purchase.

We're sorry but there are no candles available for lighting.

You have already begun a candle purchase session. If you would like to continue with your current candle choice please click "Continue" otherwise please click "Select Another".

In Memory of
Kevin Tyler
Benjamin
1998 - 2018
Click above to light a memorial candle.

The lighting of a Memorial Candle not only provides a gesture of sympathy and support to the immediate family during their time of need but also provides the gift of extending the Book of Memories for future generations.

In the event that there is an error
in the information presented,
please contact the funeral
home by clicking here. 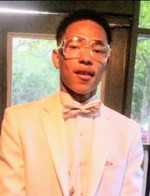 Kevin Tyler Benjamin walked into the loving arms of the Lord and Savior, Jesus Christ, on April 30, 2018, as a result of his precious life being violently taken at the young, tender age of 19. Kevin was born July 27, 1998, in Omaha, Nebraska. Shortly after birth, Kevin moved to Mobile to live with his grandmother, Deborah Benjamin, who raised him and his younger brother, Kalieb Benjamin. He is preceded in death by his paternal grandparents, Ruby and Dewey Frazier of Mobile.

Kevin was an avid lover of sports, and during his young life played football for Trimmier Park and basketball throughout middle and high school. He also enjoyed playing video games and competitively "hooping" with his neighborhood friends. At BC Rain High School, where he graduated May 2016, Kevin developed a passion for welding. After graduating high school, Kevin attended Bishop State Community College completing his welding degree. Kevin was a handsome, hardworking, sweet-spirited young man with tremendous potential of being self-sufficient. He dreamed of becoming his own man and earning his own way, then reaching back to help his family and those he loved.

His smile and laugh were captivating, and he always lit up a room. He was kind, polite, and mild-mannered. Kevin's sweet spirit will live on and on. He will forever be cherished, loved, and remembered. Kevin is known to all of us by many different nicknames. To name a few: Lil Kevin, Lil K, KB, and "White" Boy. Loved by all who knew him, Lil’ K was a chill, cool dude. Kevin loved to dress “fly” and have the latest Jordans. His sense of style was unmatched, and his friends lovingly referred to him as “The Real Jumpman 23.”

His remains will lie in state on Friday, May 11, 2018 from 1 - 8pm at Small’s Mortuary, Mobile.
Visitation will be held on Saturday, May 12, 2018 from 12pm until the 2pm funeral hour at Christians United Baptist Church, 2576 Pleasant Valley Road, Mobile, Alabama. Interment will follow in Pine Crest Cemetery-Mobile, AL.

To send flowers to the family or plant a tree in memory of Kevin Tyler Benjamin, please visit our Heartfelt Sympathies Store.

This Book of Memories brings those affected by loss together by encouraging communication and self-expression. By giving friends and family a special place to tell their stories and express their feelings of loss, it helps them care for one another during a very difficult time. Click on any of the links to the right to access features or information within this memorial website.